Was it really a year ago we retired? 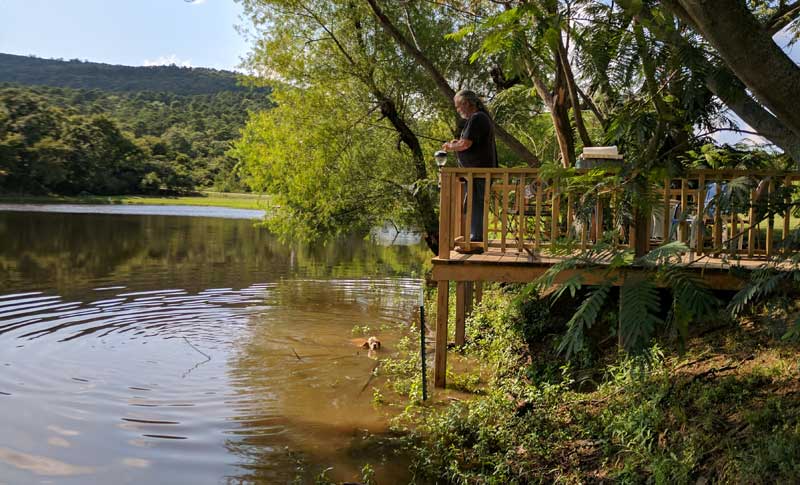 Here it is August already. My goodness, the days (and years) are flying by.

It has now been one full year since we sold our e-commerce business and officially became “retired”.

Truth be told, I didn’t become “officially retired” until October when I turned 62 and started drawing Social Security, but in my head, I was a retired gal. With the sale of our business, we were able to pay off a whole bunch of stuff including the note on my studio so I no longer had to knock myself out silly to pay the mortgage and I could settle into the role of creator of art and not a producer of pottery.

Retiring was way harder than I thought it would be.

Most of you will probably shake your head at that statement but it was the truth. And even now, a year later, I still think of weekends as weekends when in fact…

Every day is now a Saturday

For me, the hardest part of retiring was no longer feeling like productive member of life. It was difficult letting go of the working mentality I had for the past several decades.

Could we afford to retire?

It was quite scary walking away from a steady income. Ben and I went through some rough financial times, like so many of our age. In 2011 we made the decision to leave expensive California for a more affordable lifestyle in SE Oklahoma. This was decision we do not regret. It was this decision that changed our lives for it is here that we could afford to retire. 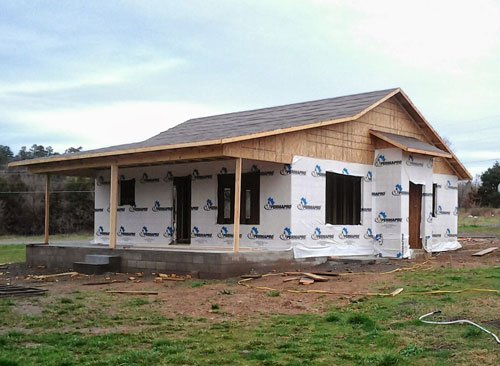 We built a small 900 square foot home on a lovely small piece of property facing a beautiful pond and mountain. We call it our “Forever Home” and it’s the home we will grow old(er) in.

When you think its time you just got to go for it.

When we finally made the decision to sell the business and retire it was after thinking hard about these questions.

The answer to all of these was…”you won’t ever know until you just do it“. It’s like having a kid, if all parents waited until they could afford a kid there would be a lot fewer children in the world.

It was scary but what we found out is that yes, we could. There were definitely lifestyle changes that took place; we bought less “stuff”, went out less, chose cheaper vacations, wore socks until they had holes, but we made it thru a year and have wanted for nothing.

Readjusting the hours in the day to suit a new lifestyle.

For several months we both felt the need to “go to work” so we found ourselves scheduling our days to be in our respective shops. I still do that. I find myself going in by 10 every morning and watching the clock and leaving by 4. I still think as Saturday and Sunday as a day NOT to go into my studio. Part of the reason is that I do have a gallery in the front of my studio where folks can come in to purchase pottery. So I feel I need to be “Open” for that. But I don’t need to be since most of my selling is Online! 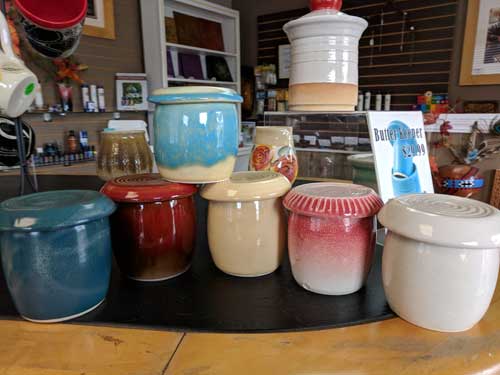 Butter Keepers inside the Gallery at Yellow Cottage Studios

But every day I see changes within myself.  In June Ben and I took a 10-day vacation to South Dakota. Two days after returning from our trip I had to take a trip to Florida for the death of my father. I was gone almost the entire month.  When I got home I was so happy to be back in the studio that any distraction was a source of frustration!

Neither Ben or I regret making the decision to sell the business and retire. We are fortunate enough to have fulfilling hobbies in our lives and the health of body to enjoy them.  While although we don’t have the money to take lavish trips and eat at the fanciest of restaurants we have peace of mind that we are living our lives in a way that gives us great enjoyment.

And we have our dogs. Suzie and Charlie are the cockers.  Crystal is our newest addition! She showed up on our porch while we were on vacation and never left! 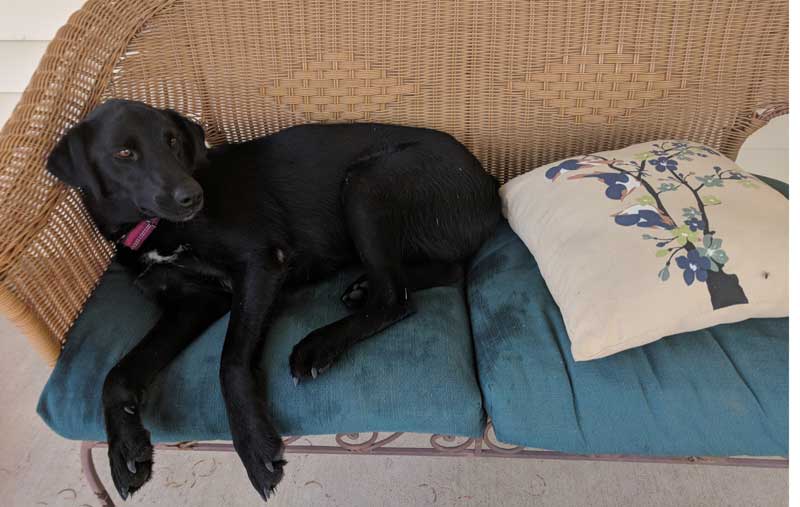 Crystal made herself right at home on our porch!

I use the Divi Theme from Elegant Themes.

Let's stay in touch.....Want to know what's new, whats happening, and what's going on? Let's stay in contact. Sign up. I promise not to send to much stuff. Really Truely!

© 2018 All Rights Reserved. Dani Montoya ~ Unauthorized use and duplication of this material without express and written permission from this blog’s author and/or owner is strictly prohibited. Excerpts and links may be used, provided that full and clear credit is given to Dani Montoya and Yellow Cottage Studios with appropriate and specific direction to the original content.

Yellow Cottage Studios is a participant in the Amazon Services LLC Associates Program, an affiliate advertising program designed to provide a means for us to earn fees by linking to Amazon.com and affiliated sites.