Cabin Fever & the pottery glaze that goes with it! 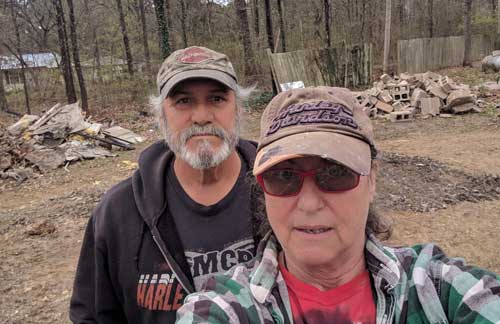 In 2018 my hubby excitedly showed me a Facebook Marketplace ad for a lakefront lot on Sugarloaf Lake in Arkansas.

It was always my dream to own a place on a lake. To set the record straight, I am not a swimmer, a boater nor do I even like the taste of fish, but the thought of having a place on the lake was just something I knew would soothe my soul.

The lot wasn’t a big one, I believe its .75 acres but it was a mess. The original house had burned two years earlier and although most of the debris was removed there was still a lot of cleanup needed. 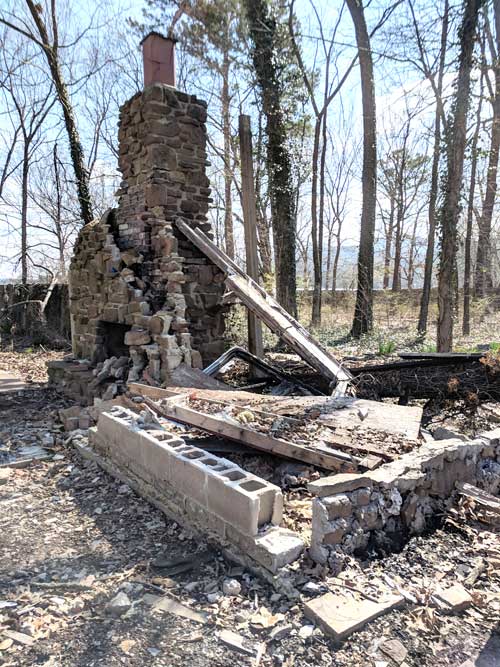 One thing I fell in love with was this stone fireplace. I have always been intrigued with ghost fireplaces. It stayed!

The clean-up was mostly cinder blocks….and there were a lot of them. And broken glass ripped out carpet and leftover roof trusses. What the lot did have was electricity, septic, water, several concrete pads, and a privacy fence surrounding the lot. It also had a run-down dock and a boathouse!

It was hard to pass up, so we bought it.

We bought it as a place to leave our very small travel trailer (21 ft) and spend weekends there with our three dogs. It was only 30 minutes from home (and 20 minutes from my studio) so that worked out perfectly. 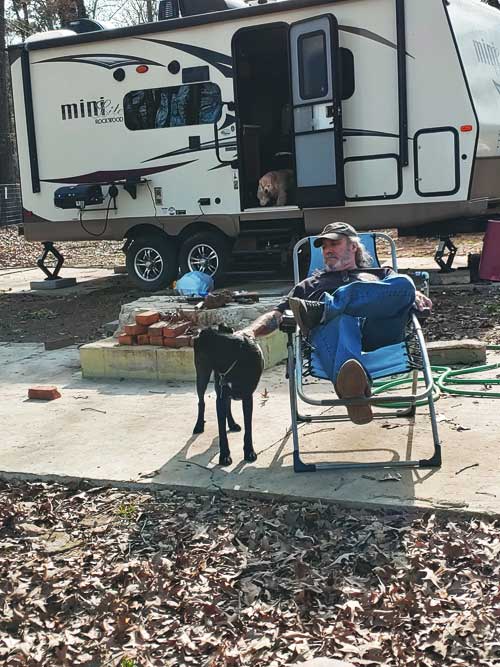 Chilling outside of the tiny camper is great when the weather was nice but rainy days were hell!

The first year we spent cleaning the lot up. It was an awful lot of work for these two old folks but we incorporated the 20/40 rule. Work 20 minutes, rest for 40! (See above Photo of Ben during that 40 minute period)

It worked and eventually we got all those damn cinder blocks gone. The land was leveled out, old timber was burned and trash loads of broken glass and tile were hauled away. Three years later and I am still picking up glass after a rainstorm. 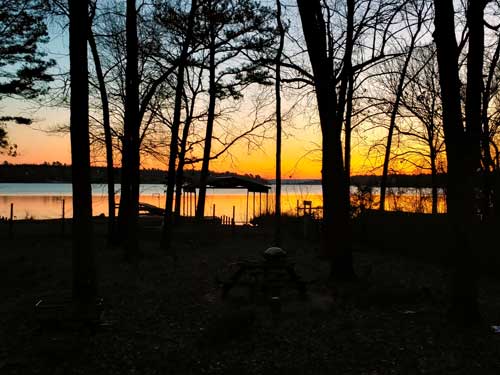 The Gorgeous sunrises were not something we were expecting. But they are amazing

As soon as the place was cleaned up enough we moved the travel trailer into place and started to enjoy all our hard work. It did not take us long to figure out that, although we loved the lake lot, two adults and three dogs in a 21 ft camper on a rainy Arkansas day, was not going to work.

In 2020 we made the decision to build a small one-bedroom cabin.

I scoured the internet for floorplan ideas and eventually found a floorplan blueprint on Etsy that was really close to my vision. There is only so much you can do with a one-bedroom, one-bath and this floorplan fit the bill, both space-wise and budget-wise. This was the plan we purchased. It was well worth the $30. We did not build exactly like the plan but it was a place to start and a way to find out if it was something we could afford to do. We started this process well before lumber rates went haywire due to the pandemic so it WAS something we could afford. If it was a few months later, I doubt we could! 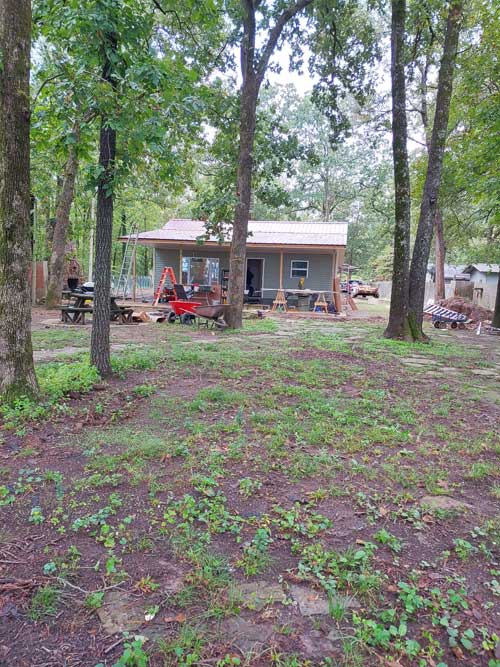 Once the shell of the cabin was built it was now up to Ben and me to put “us” into the place. Ben was tasked with building the kitchen and bathroom and I was tasked with wall painting and decorating.

One of the things I wanted to do was make all my kitchenware. I knew that was going to be a challenge when it came to plates because they are all that easy to make. They warp, crack, out of round, and all kinds of weird things. But I was going to try. 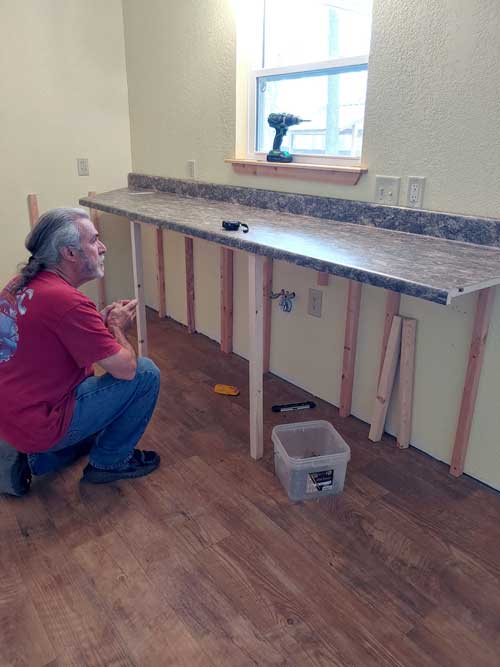 Ben built the entire kitchen in the kitchen!!

And to match the rustic look that Ben was putting into the cabin with his shelves and counters, I needed something equally as rustic looking! 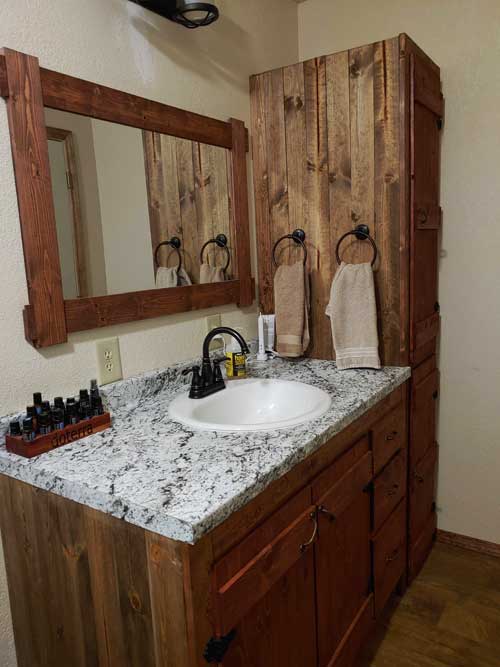 We wanted the cabin to look like a cabin so Ben built the cabinetry rather rustically.

Plates have never been something I made a lot and they are not as easy as they look like they would be but somehow I managed to get some through the “making” process!!! I really only wanted 4 plates of each size but I made 5 of each “just in case”. 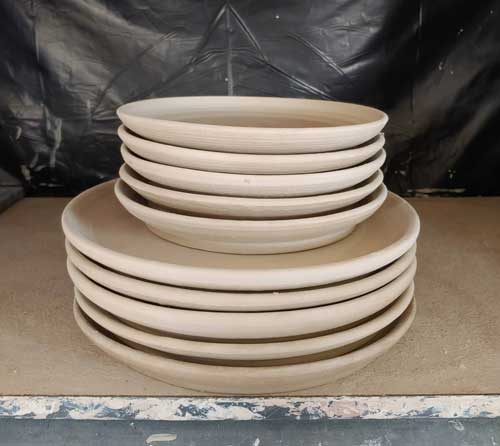 Pottery Plates getting ready to be glazed

I have never really felt good about traditional pottery glazing and am pretty much self-taught.  Since I make my own pottery glazes in my studio I don’t have the resources available that the commercial pottery glaze users have on what glazes look like when layering, so everything right now is experimental

I knew I wanted rustic and I also am someone who loves spontaneous and unique. After experimenting around I found a pottery glaze combination that I loved. It’s comprised of three glazes and they look wonderful together!! 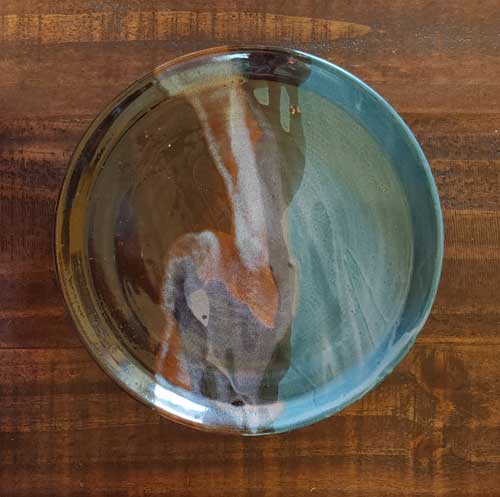 The Perfect Pottery Glaze. I love how the three glazes all look together and flow into one another

My experimental Plate above came out beautifully and I was super stoked. I moved forward with the rest of the plates and ran into a WHOLE LOT OF pinholing with the pottery glaze. It was so disappointing. Pinholing is a bane to potters and I got a lot of wonderful advice from other potters which I am working through now. That will be the subject of another post.

Meanwhile, we are using and enjoying our cabin and our plates. My hubby has finished the bathroom and the kitchen, and I have everything painted, the walls are full of my artwork and my kitchen is filled with my pottery.

This cabin is all about US!

Want to know what's new, whats happening, and what's going on? Let's stay in contact. Sign up. I promise not to send to much stuff. Really Truely!

EMAIL SUBSCRIBERS GET FREE SHIPPING TOO!!